I would like to replace the front brake hoses on my 65 monza. I am a little concerned that the nuts on the end of the line may give me some problem. The hoses don't look bad nor do the lines. But who knows whats the insides look like. Its it possible to snake a prebent line in without removal of the gas tank ?
Top

I'm not sure about routing the steel brake lines, since I've never done that on a Corvair (yet). But as you will note, the information from the Clark's catalog pages does indicate that "SOME lines require removal of gas tank or rear suspension members".

Here are some tool tips that might help you with removing difficult brake line fittings.

When disconnecting steel brake lines, it is often best to use flare nut wrenches, as shown in the picture below. You cannot use a box-end wrench, because there is no way to get it over the brake line. Also, a standard box-end wrench is a 12-point design that grips only the corners of the fitting. A flare nut wrench, like a six-point socket, uses fewer flat surfaces that provide a better grip -- distributing the pressure more-evenly on the fitting surfaces. And a standard open-end wrench may slip and damage the flat sides of the brake line fitting. A flare-nut wrench provides the best-possible grip and is least-likely to round-off or damage the brake line fitting. 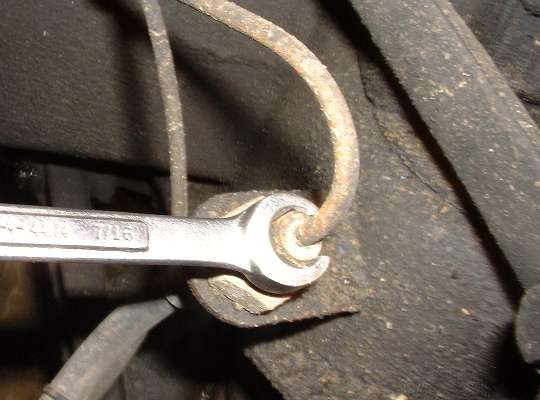 I've had great luck with removing nasty brake line fittings by using a Vise Grips Brand 7LW. They also work well when someone before you has buggered up the hex nut. I have flare wrenches. I have been spraying Kroil on the nuts for two days now. The lines otherwise look good, it is just the nuts that I m concerned about. I have never seen the Vice Grip. Maybe I should pick up a pair. Sometimes you should just leave weel enough alone, If it aint broke don't fix it.
Top

I just received a new Clark's 2013 Supplement in the mail today. If you are interested, they now offer pre-bent brake lines for Corvairs in STAINLESS STEEL. Here is the on-line catalog URL that describes them...
http://www.corvair.com/user-cgi/catalog ... age=SUP-32 Thanks for posting the pic (by azdave) of the vise-grips. Although I have several pair, I never saw the actual application.
PS: For future browsers: Don't buy your flare nut wrenches from HF. They immediately stretch upon actual use trying to loosen a tight fitting.
Top

Too bad the lines wre not stainless to begin with! We would nt be haing this conversation. You probably should not let any wrench from HF touch a bolt or nut.
Top

Don't feel too badly about the possibility of decaying steel brake lines on a 40+ year-old Corvair. My 2005 GMC Sierra 4x4 with only about 50,000 miles on the clock just had to have all of its steel brake lines replaced because one of the steel brake lines burst and all of the brake lines throughout the truck were showing signs of excessive decay through rust!

The truck was originally a Pennsylvania vehicle, and the GMC service department was blaming the excessive corrosion on salt exposure in that state. HOWEVER, my last truck was a 1996 Ford Explorer 4x4 SUV that was driven more than 160,000 miles over more than twelve years before I sold it. The brakes on that vehicle never showed any sign of corrosion or rust, and as far as I know the 1996 Ford SUV is still being driven in Pennsylvania after more than sixteen years with no problems. I have read numerous horror stories on the Internet about GMC and Chevy truck brake lines rusting out prematurely. The line that actually burst on my 2005 GMC after only seven years (several of those years in North Carolina) burst at a point INSIDE THE ENGINE COMPARTMENT, near the master cylinder, where the line was attached along the top of the driver's side frame rail, next to the wheel well and the side of the engine. Exposure to water and road salt spray in that area should have been almost zero in that location, yet that is where the brake line burst! Because of advanced corrosion, I ended up replacing all of the brake lines in the seven-year-old truck, and of course none of it was covered by any kind of warranty.

Of course, this is not good news for many newer GM vehicle owners. Ford products appear to do much better, as do Toyota and Nissan products (I have owned all three and drove them extensively in Pennsylvania with no sign of excessive rust or corrosion.
Older GM products, like Corvairs, have done well too (at least in the area of brake lines). The added cost of stainless steel brake lines might be worth the expense -- each owner will have to decide that for themselves. But the apparent rapid decay of brake lines on newer GMC products does seem troubling. I did file a complaint about the GMC brake lines with the Feds (NHTSA), for whatever good that might do.

When my brake line burst, I was still in my driveway. Even with a dual master cylinder, I had almost zero hydraulic brake capacity with the left-front brake line open to the outside world. Brake fluid was spraying all over the power steering unit, and the rear brakes would barely hold the truck still when the transmission was in Drive. I would hate to think what would have happened had I been travelling at about 35 mph or so and approaching a red light when that brake line burst. There is no gradual decay or warning of impending doom. You either have brake pressure or you suddenly don't. The resulting warning light on the instrument cluster is of no help... after the fact. Most Corvairs don't even have a dual master cylinder, so be caustious if you have the original brake lines in your car, a single master cylinder, and you don't know when the last brake fluid flush was done on your Corvair. Hidden decay could be happening inside your brake lines...

#1 using a propane torch to heat the nuts just before you try to turn them will help a bunch.

#2 I use a pair of regular vise grips over my flare nut wrench on the really stubborn nuts.

if you are replacing the lines just cut them off and use six point socket on the nuts. I believe the only good way to get line in behind gas tank is to remove the tank. Pre bent lines are not necessary,just buy line from local parts store and use old one for guide to bend new ones.
Top

60vair wrote:...Pre bent lines are not necessary, just buy line from local parts store and use old one for guide to bend new ones.

Fabricating your own steel brake lines takes some skill and specialized tools to form, bend and double-flare the ends. You can compare the cost of the raw materials and tools with the price for prefabricated steel lines from Clark's Corvair Parts. Of course the stainless steel lines from Clark's, should you choose stainless steel, would be more costly.

This video demonstration provides a good example of the tools, procedures and work involved...
Brake And Fuel Line Fabrication

Should you decide to "roll your own", you can find the tools needed at Sears, on Amazon.com, local auto parts supply stores, etc. Additional procedural references can be found via Google.

you can buy the line right length the most time that already has the flares and nuts on the ends.
I bend all my lines by hand with no use of special tools. guess I have the skill then.
Top

I am not too concerned about making up lines. If I was to buy pre bent lines, I d buy stainless. Its the whole package that doesnt appeal to me, ie removing the gas tank. The lines don't look awful. Its the nuts that look bad. At least I put in a dual mc a couple of years ago. Got the rear hubs installed with new hoses and lines. All is quiet again. Maybe I am a little vairedout
Top

We have been attempting to offer a "shotgun approach" with advice -- to cover all possibilities -- but we never knew the source of the leak in the first place. If the original leak was in a wheel cylinder, for example, then maybe all of the steel lines are OK and a fluid flush and change and a wheel cylinder rebuild or replacement would be all that is needed. The same might be true if the original leak were with one of the four flexible brake hoses. If one burst, of course that hose would have to be replaced. But at the same time, if one 50 year old hose burst (probably due to age-related deterioration) I would replace all four hoses, since they are all likely the same age, and if one blew, the others may be in similar states of deterioration. The best, safest course of action would be to replace them all. And, if a steel line burst, that would put all of the steel lines in question -- in which case it just might be worth the cost and hassle to assume that all of the old steel lines are in a similar state of hidden decay -- justifying a move forward with a total line replacement.

So... was their an original brake fluid leak? Or were you just concerned about the aging hardware or hoses and wanted to begin a process of upgrading or replacement with new items as preventive maintenance?

I replaced the rear hoses and lines when I replaced the hubs. At that time ordered up the front hoses. i figured that since I had to bleed the system, I would replace the front hoses. Not leaking. Just preventive maintenance. After going through the rear hub replacement, I am not sure I want any more rust and crud in mt eyes removing the gas tank. Sometimes.you just have to adopt the "if it aint broke don't fix it" philosophy.
Top

Sometimes you just need to take a break and enjoy the car.

There is always room for upgrades and improvements, as you attempt to 'second guess" what might go wrong.

It can drive you crazy

and take all of the enjoyment out of Corvair ownership!

It is good that you are performing preventive maintenance, but you are right in taking a break.

I originally thought you were dealing with an actual brake failure. Obviously brakes are one area of safety you need to be concerned with -- especially on an aging Corvair!

But I hope you also enjoy your Corvair and see it as an enjoyable hobby.

The last thing you want to do is "burn out"

, to the point where you would no longer enjoy Corvair ownership!

The car is very solid. I also have a 57 cj5 that is like having an extra child. When I get tired I switch over to the other. The Monza convertible is the wife's summer car, so I have to keep it running. A lot easier to spend money on the Monza than the jeep
Top
Post Reply
18 posts