New to this forum and haven't found an answer via the search feature so I thought I'd ask directly. This forum says mechanical questions but since I didn't see an electrical or ignition forum and there are other questions here for pertronix etc. I thought I'd place my question here. I have a 65' corsa 140 and have decided to replace the factory distributor & coil.

For convenience I went with a TSP ready to run distributor and MSD Blaster high vibration coil. This distributor comes with options to use different tension springs for the mechanical advance as well as an option to block off the vacuum advance altogether. My question is how do I tell which springs are best for my application or if I should block off or continue to use the vacuum advance? I purchased this car fully restored and the previous owner rebuilt the engine with a slightly larger cam (Otto 20 I believe) and headers. I suppose I can just put them in and experiment with what seems to work best when I drive it around but to me that's too arbitrary, I'd really like to know if there's a method to determining the best advance curve.

If your curious as to why I chose this setup instead of other options available, in my previous Corsa I went with a Pertronix II and this worked ok for a while but eventually died so I went back to points until I sold it and bought this car. Last summer I met some people using this setup at the last Corvair show I attended and they really liked it so I thought I'd try it this time. Any knowledge anyone can share to assist me with this is greatly appreciated.


The relatively low Corvair engine compression ratio (8.0:1 - 9.0:1), relatively low RPM operating range and six cylinder configuration does not really strain the capabilities of even a stock Delco ignition coil. The turbocharged engine combustion chamber pressures may make it a little harder to fire a spark plug, but for the most part ignition system secondary voltages are not a critical element in obtaining good performance in a normally aspirated Corvair. Correct ignition timing, carburetor setup, fuel octane rating, and spark plug heat range to prevent combustion chamber detonation are critically important — even more so in a hot-running air-cooled engine.

Managing heat limits maximum sustained horsepower capabilities. Camshafts must be selected carefully, since changing one is not the relatively simple procedure found in V8 engines! In the Corvair engine swapping camshafts requires a complete engine teardown and splitting the cases. Performance carburetor options are generally limited by the intake manifold design. Significant performance gains have been realized by removing the intake manifold casting and replacing it with separate single intake port manifolds and carburetors like a pair of Weber 3-barrel carburetors, like those used in the Porsche 911. Big valves found in the 140 hp heads and tube-type exhaust headers have been successfully used in racing configurations.

The modern Stinger distributor includes a magnetic trigger breakerless ignition system that can control most ignition coils — even those high output units that have an ultra-low, high current primary because of the reduced primary resistance (as low as 0.6 ohms in the coil, instead of the standard nominal 1.5 ohm primary resistance). This increases the primary coil current on a 12 volt system, which translates into a higher secondary coil output to the spark plugs. The increased spark plug voltage is not essential in the Corvair engine. But the increased ignition system reliability and timing stability offered by the magnetic pulse-triggered breakerless ignition system is a big plus for the Corvair engine.

bbodie52 wrote:This will give you some idea of the differences between the 140 hp engine and the 110 hp engine. If you want to know something about what works in the Corvair world, you might start with a reading assignment. This book contains a great deal of performance information about the Corvair. As a teenager I read the earlier version of this book in 1970 and found it to be very valuable and informative. It is a personal favorite, and here is a recent update... 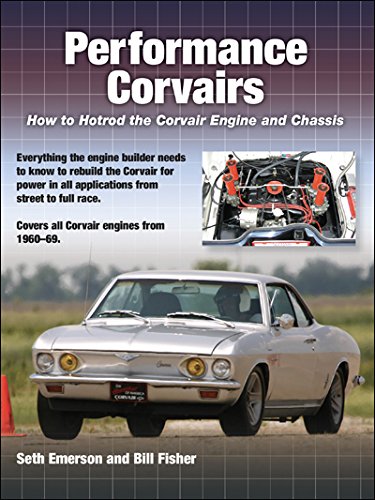 You definitely want the vacuum advance. It will run cooler and get better mileage and it won't hurt performance at all.
113 Corvairs, 5 Ultravans and counting
Northlake, TX
Top

(In a modern engine design, the ignition timing advance is managed by a programmed computer curve from idle to maximum RPM speeds, with changes dialed-in based on sensor input to the computer. Such technical wizardry was not possible in the days of mechanical carburetors and distributors).

Thanks everyone I appreciate all the info, it gives me a good starting point. Hopefully the weather holds this weekend and I can get this done.