Just read over on the other forum that Clark’s is closed till April 7. To bad. I was going to start a project on my Corvair but will now wait.
Steve
Bakersfield,CA
1969 monza coupe
110, 4speed
Top

I saw that too. That’s a bummer.

If you need parts in that time try Raffee Corvair. I just got some parts from him today.


As of 12:00 3/24/2020 Clarks Corvair is shut down
due to Covid 19.Governor Baker announced the
order would take effect at noon Tuesday and last
until noon on April 7. The order closes all non-
essential businesses to workers and the public,
except for essential workers. Please note that we
will not be answering phones, e mails or
processing orders until further notice. We will let
everyone know as soon as we are back open.
We thank all our loyal customers for there years of
business and understanding at this time.
Clarks Corvair Parts.

I got an email today from Clark's telling me they are shutting down.
As of 12:00 3/24/2020 Clarks Corvair is shut down due to Covid 19.Governor Baker announced the order would take effect at noon Tuesday and last until noon on April 7. The order closes all non-essential businesses to workers and the public, except for essential workers. Please note that we will not be answering phones, e mails or processing orders until further notice. We will let everyone know as soon as we are back open. We thank all our loyal customers for there years of business and understanding at this time. Clarks Corvair Parts.
64Powerglide, Jeff Phillips

If you need parts in that time try Raffee Corvair. I just got some parts from him today.

[Massachusetts] Governor Baker directed the Department of Public Health to issue a Stay at Home Advisory:

The Baker-Polito Administration issued a list of designated businesses and other organizations that provide essential services and workforces related to COVID-19 that shall continue to operate brick and mortar facilities during this two-week time period. This list is based on federal guidance and amended to reflect the needs of Massachusetts’ unique economy. Businesses that provide essential services according to the essential services list do not need to take any further action in order to continue operating. Businesses will not receive a designation or certification from the Commonwealth specific to their individual company. While these businesses are designated as essential, they are urged to follow social distancing protocols for workers in accordance with guidance from the Department of Public Health.

Businesses and organizations not on the list of essential services are encouraged to continue operations through remote means that do not require workers, customers, or the public to enter or appear at the brick-and-mortar premises closed by the order.

Restaurants, bars, and other establishments that sell food and beverage products to the public are encouraged to continue to offer food for take-out and by delivery if they follow the social distancing protocols set forth in Department of Public Health guidance continue operations. On-premises consumption of food or drink is prohibited.

Small businesses and their employees are hit pretty hard when caught up in blanket government mandates like this. Clark's employs only less than 25 employees — working in several buildings — and has no visiting customer base or storefront, operating in a very rural area only via mail-order. It is a shame that exceptions cannot be made in favor of the economy and the rural small business employees who are unlikely to have any exposure to the Corona Virus. Employers like Clark's could simply mandate that individuals who believe they might have been exposed or who exhibit symptoms remain home. With Clark's personnel operating with minimal direct or close contact, they could certainly work as do grocery store or restaurant (drive-thru) employees do to minimize risk of spreading the disease.

If large mail-order firms like Amazon.com can continue to operate, why is a small firm like Clark's forced to close its doors?
Brad Bodie
Lake Chatuge, North Carolina

I can't explain why Amazon can stay open and Clark's can't, but rules are rules and our governor has spoken. Contrary to how we may feel, Corvair parts aren't essential to every day life like groceries, prescriptions, etc. Look at it this way - if Clark's stayed open and just one of their employees brought COVID-19 into the building, more of them could end up with it and be closed even longer. As long as the shut-down doesn't get extended even further, April 7 will be here in no time. Take advantage of the situation to work on other areas of the cars that don't require new parts. I'm focusing on powder coating many of the parts I'll need when reassembly time rolls around. I have plenty to keep me busy in my spare time.

Hang in there guys.
"We are the people our parents warned us about."
Top

In Texas auto parts stores are considered essential and can stay open. I see a lot of other businesses open that aren't allowed and no one is making them close so far.
113 Corvairs, 5 Ultravans and counting
Northlake, TX
Top

Ironically, all the liquor stores are open. "Essential" I guess.

"We are the people our parents warned us about."
Top

Bruins_Fan
Corvair of the Month

I haven't seen them on an exception list. Are they just ignoring it?
113 Corvairs, 5 Ultravans and counting
Northlake, TX
Top

There is much that remains unknown about this COVID-19 Virus. Federal, State and local government agencies are making adjustments as infection numbers and medical opinions are revised. A mandate that comes from the state capital that encompasses the entire state may not fully consider local and individual economical (business and personal) issues. Local governments may best serve as the "front line" to evaluate implementation of state mandates, and may be best positioned to evaluate exception requests. This approach may allow our economy and individual health needs to be "fine tuned" to better meet the needs of our nation. Our nation's personal health and economical health must both be given consideration, so that the most appropriate balance can be found.

The financial health of businesses like Clark's Corvair Parts and its individual employees should be a priority consideration that is best evaluated by the business owners and their employees. State-level government cannot possibly be in a position to fine tune or evaluate government policy exception requests, as they would be even-more overwhelmed than they already are. Business owners/managers should have a process available to them to allow them to evaluate their own circumstances and employees. If they feel it would be justifiable to request an exception that would permit them to operate their business safely, local county/city-level governments should be able to process and evaluate those requests and forward them to the state for final approval. This type of continuous fine-tuning and adjustment will help our country to move in the direction of economic recovery that parallels health recovery efforts.

In Virginia the governor has ordered all churches to shut down but left all the state run liquor stores open.
This is the same governor who believes in abortion for an hour or two after birth
Last edited by corvair500 on Sun Mar 29, 2020 4:42 am, edited 1 time in total.
Top 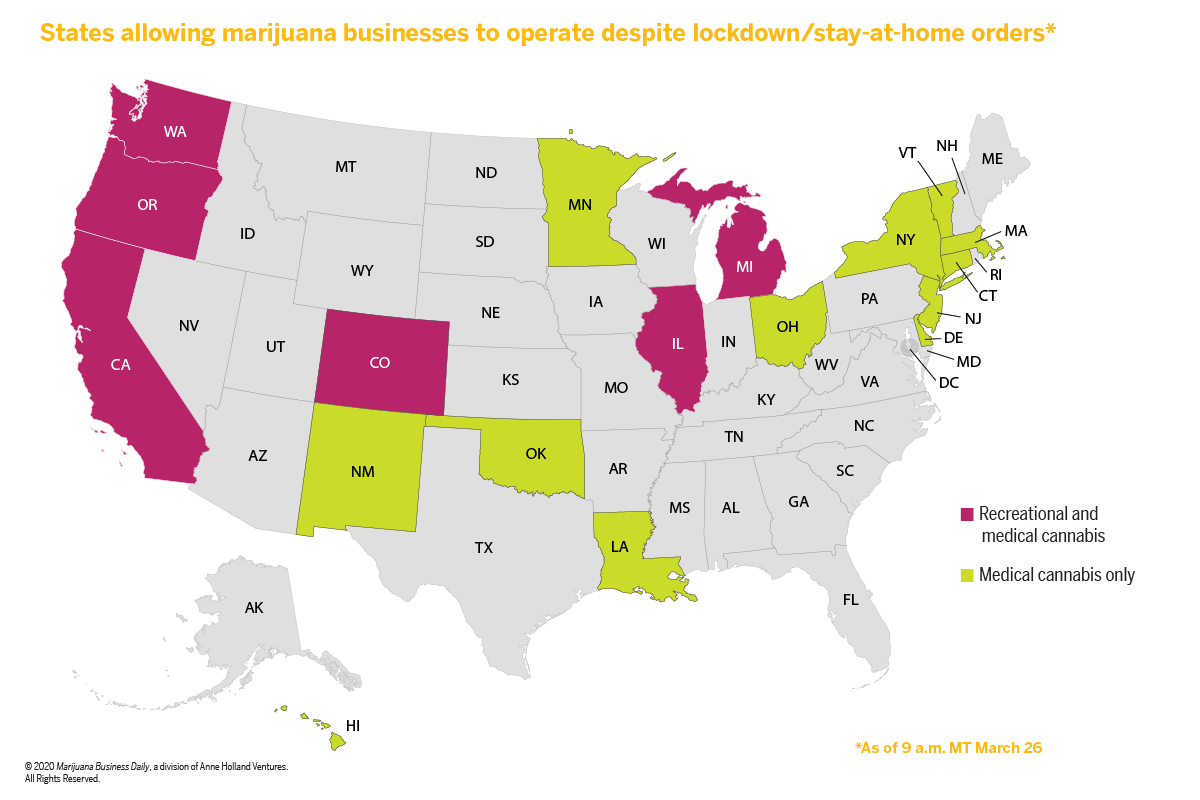 (Editor’s note: Please note that the accompanying map applies only to states where officials have implemented stay-at-home orders due to COVID-19. The map has been updated since this story was originally published. This story also has been updated to reflect the constantly changing environment in state-legal marijuana markets as the coronavirus outbreak evolves.)


Most state governments around the nation have deemed medical marijuana companies “essential” during the coronavirus pandemic, meaning the vast majority can keep doing business after residents were told to stay at home and many businesses were ordered to scale back or close their operations.

But the picture is murkier for recreational cannabis companies.

The quickly spreading coronavirus – and the surge of states telling residents to stay home since last week – has created confusion among cannabis companies over whether officials would require them to cease operations, even temporarily.

Here’s where each state with some form of statewide stay-at-home order stands as of the morning of March 26:

California: Every state-licensed marijuana company is allowed to continue operating, according to state guidance and statements from regulators.

Colorado: Both medical and recreational marijuana retailers are allowed to continue operations, under an executive order issued by the governor last week before he released a statewide stay-at-home order on March 25. However, recreational cannabis shops are limited to curbside pickup while medical dispensaries can stay fully open.

Connecticut: Medical marijuana dispensaries and producers are classified as part of the state’s health-care sector and are exempt from closures, according to state guidance.

Delaware: All medical marijuana dispensaries are exempt from closure during the statewide stay-at-home order issued by the governor, the state’s joint information center confirmed to Marijuana Business Daily via email.

Illinois: All state-licensed cannabis growers and retailers are “essential” according to the governor’s stay-at-home order.

Louisiana: The medical marijuana supply chain is exempt from closure under the governor’s statewide stay-at-home order, state officials confirmed to MJBizDaily via email.

Massachusetts: The governor has classified “licensed medical marijuana retailers” as essential but not recreational cannabis businesses, which were required to close by March 23.

Michigan: Although the governor’s stay-at-home order doesn’t mention marijuana or cannabis directly, the state’s Department of Licensing and Regulatory Affairs stipulated in a news release on Monday that all licensed medical and recreational marijuana businesses can remain operational. Retailers, however, are limited to “curbside service or delivery,” meaning storefronts will not be open to the public.

New Jersey: All medical marijuana dispensaries were classified as “essential” by the governor’s stay-at-home order.

New Mexico: The state Department of Health issued guidance to medical marijuana businesses before the governor’s stay-at-home order, clarifying that all MMJ producers are an “essential” part of the health-care sector.

New York: In a clarification document released after the governor’s stay-at-home order, the state Department of Health said all licensed MMJ companies are classified as “essential.”

Oklahoma: All MMJ businesses were categorized as “essential” and can remain operational, the state’s Medical Marijuana Authority clarified on Twitter this week after the governor issued a statewide Safer-at-Home order for the elderly and “vulnerable populations.”

Oregon: The governor’s stay-at-home order doesn’t specifically mention cannabis or marijuana. But the state Liquor Control Commission, which oversees the industry, issued a temporary rule allowing licensed MJ retailers to provide curbside pickups for customers who submit orders online. So far, the state has not classified the industry as “essential.”

Washington State: The governor’s stay-at-home order includes an appendix that identifies cannabis retailers and workers supporting the supply chain as “essential.” Additionally, the state Liquor and Cannabis Board issued an order allowing retailers to continue sales through curbside pickups. The board also clarified in a news release Tuesday that all licensed marijuana businesses can continue operations and that retailers will be allowed to sell to both medical and rec customers.

John Schroyer can be reached at johns@mjbizdaily.com

That is crazy. Why are liquor stores open?
113 Corvairs, 5 Ultravans and counting
Northlake, TX
Top

Most liquor stores like my father's was sell food.
64Powerglide, Jeff Phillips