Ok... so as I've mentioned in my intro, I'm new to Corvairs but I am spending a lot of time learning about them and working at fixing some of the issues my 1964 has come with. The other day, I turned my attention to the top of the engine, as my attention has primarily been on the underside so far. And I noticed that what I learned was the choke rod was actually not attached to any part of the carburetor! And it looks like the previous owner fitted a wire to where the choke rod should connect to (see the photo). Now, the car starts up just fine and basically runs fine (I should mention here that the car did not come with either lower shroud either). My question is... what would this accomplish other than totally disengaging the automatic choke? Is this an indication that the rest of the choke (i.e. the spring at the other end) maybe wasn't working? Or was this necessary since the lower shrouds were removed? I'd appreciate any insight as my first thought was to take off that horizontal wire and get the choke set back up, but I don't want to fix it if it ain't broke!

Yes that wire is holding the choke wide open, disabling it. You can certainly try adjusting the chokes and reconnecting the rods per the shop manual and see how they function.
Corvair guy since 1982. I have personally restored at least 20 Vairs, many of them restored ground up.
Currently working full time repairing Corvairs and restoring old cars.
https://www.facebook.com/tedsautorestoration/

The automatic choke on that side could have been sticking because of a bent or distorted rod, or a problem with the coil at the bottom. You will need to carefully examine each segment of the choke linkage to determine the cause. The bottom coil assembly can be replaced, and other parts are also available. Apparently the previous owner chose to simply disconnect the choke mechanism and tie it fully open, rather than perform the needed troubleshooting and fault isolation to determine the cause of his problems so it could be corrected.

I have included a great deal of material below to assist you. The first attached guide book, DELCO ROCHESTER - Models H, HV Carburetor Service Guide, describes carburetor operation of the various subsystems and components — including the choke mechanism. The first year for Corvair, 1960, utilized a unique choke system that was quickly abandoned. 1961 was a transition year without an automatic choke, and with a cable -operated manual choke system instead. In 1962 a newly designed automatic choke system was implemented, and this system remained in-use for the remaining years of Corvair production — through 1969. Each of these choke systems are described in the Delco carburetor service guide. 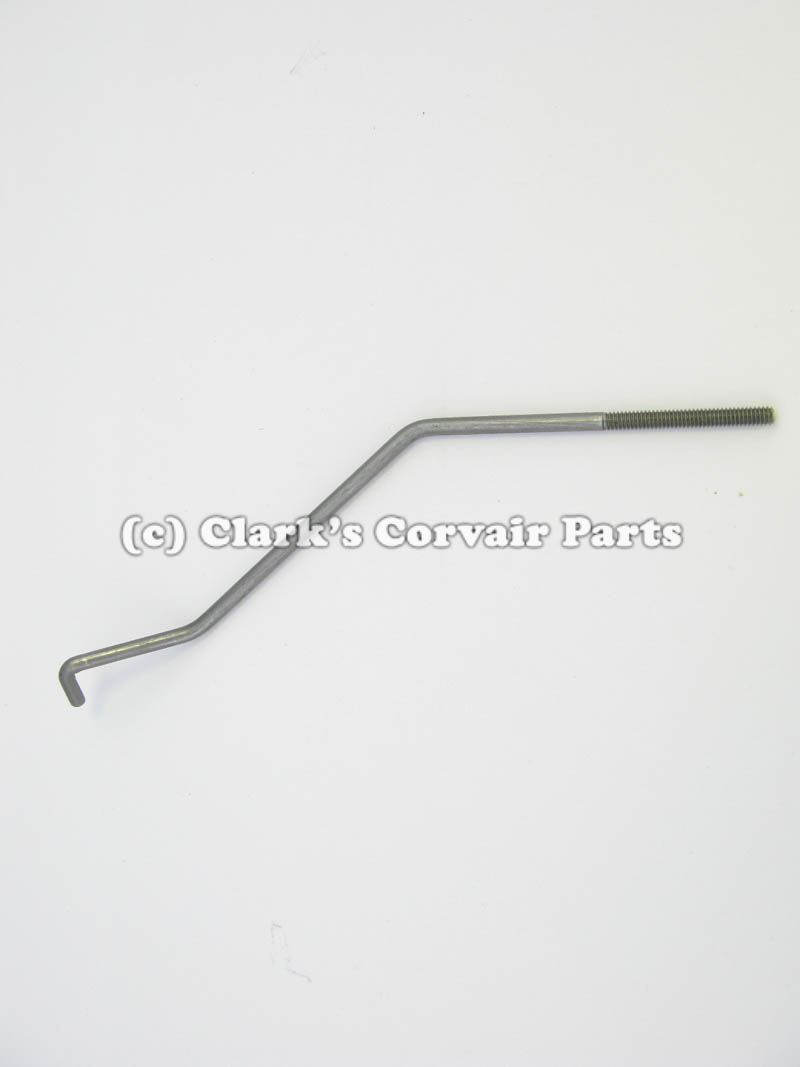 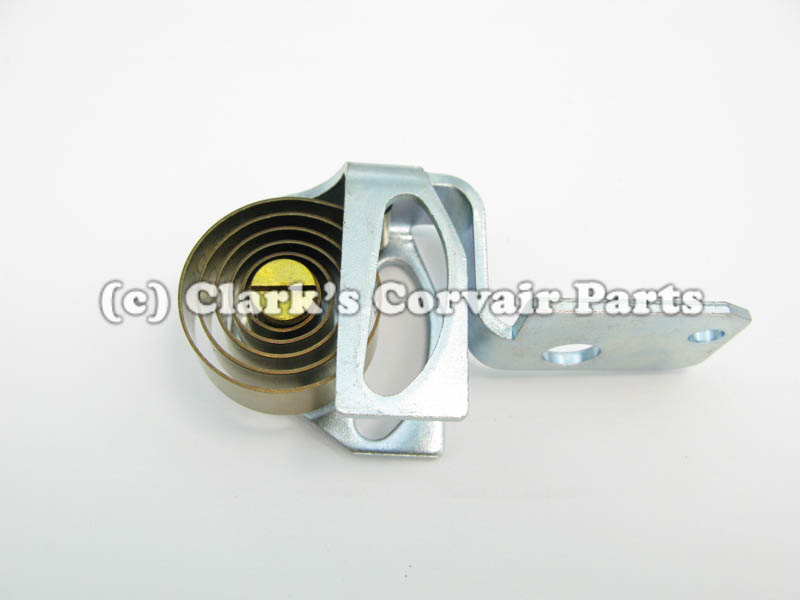 Automatic Choke Coil & Bracket : Attaches to the head. The bimetallic coils fatigue and do not respond as quickly or with as much force as when new. Your choke may not open or close as fully and as quickly as it should. These are exact replacements for 1964–69.

Original Style Choke Coil Retainers: Set of 4 = 2 standard size and 2 oversize plus a drill for oversize and instructions. Hold coil to head. 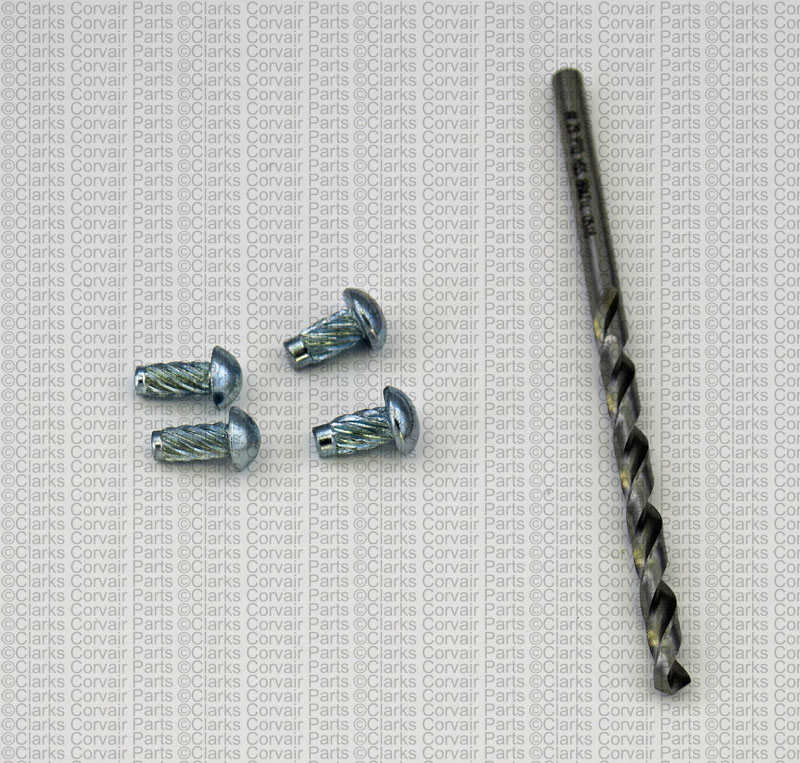 The entire shop manual and many other Corvair technical references can be downloaded at no cost using the following link...

Watching the video presentations below helps to provide insight and understanding about proper sequencing of the tuneup steps and procedures. Skipping around can insert obstacles and problems with getting the engine properly tuned.

The portion of the first video segment toward the end (Part 1, 5:10) and at the beginning of the second segment discusses throttle linkage adjustments and carburetor synchronization.

Thank you both for your replies and Brad, for all of the links and photos. However, I guess my main question was is there a good reason for him to have done that given the lower shrouds are gone as well? Or do you think it was just laziness and not wanting to troubleshoot as Brad mentioned?
Top

If it starts and runs fine he probably didn't have a big reason to fix it.
113 Corvairs, 5 Ultravans and counting
Northlake, TX
Top

Walt wrote: ↑
Mon Aug 24, 2020 7:43 pm
Thank you both for your replies and Brad, for all of the links and photos. However, I guess my main question was is there a good reason for him to have done that given the lower shrouds are gone as well? Or do you think it was just laziness and not wanting to troubleshoot as Brad mentioned?

Unless the chokes do not get to operating temp so they open the chock valves all the way because of the lower shrouds being off, there would be no reason to defeat the choke. I have run no lower shrouds before and found no issues with the chokes not working ok. That said I did not do this when the temps were below freezing wither.
Corvair guy since 1982. I have personally restored at least 20 Vairs, many of them restored ground up.
Currently working full time repairing Corvairs and restoring old cars.
https://www.facebook.com/tedsautorestoration/

Needing the chokes depends on your engine setup and air temps where you live. My chokes are disconnected and loose. They stay open on their own. I don't need the choke function nor do I need the cold engine fast idle feature you would lose by unhooking the chokes. I live in a very hot area and using the chokes is not needed. I also leave my damper doors open and sometime have no lower shrouds at all so the choke coils would be slower to operate fully.
Dave W. from Gilbert, AZ
65 Corsa 140/4
66 Corsa 140/4
66 Corsa 140/4 w/factory A/C
66 Corsa 455 Toro V8
65 Monza Convertible 110/4
66 Monza Convertible 140/4
65 Monza 4DR 140/PG w/factory A/C
65 Monza 4DR EJ20T/5
Top

I am just seeing these last 2 replies thank you both for sharing your insights with me... That was kind of what I was thinking since the lower shrouds are gone no heat is collecting under there and maybe the chokes wouldn't fully work. I live on the California coast so it's actually fairly warm where I live so maybe I will just leave these as they are unless I eventually find some lower shrouds and put them back on so the heater can work in the winter. Again thank you both for your responses have a great night!
Top

I bet they would work fine. the chokes are sandwiched between the combustion chamber and the exhaust manifold. Pretty hot there shrouds or not. but really not all that necessary when it is warm out.
Corvair guy since 1982. I have personally restored at least 20 Vairs, many of them restored ground up.
Currently working full time repairing Corvairs and restoring old cars.
https://www.facebook.com/tedsautorestoration/

As I said, the chokes will work without shrouds or damper doors but they are much slower to actuate and that means in warm climates the chokes stay engaged far long than needed if at all. I could adjust the choke pull off settings and such so I would still have some choke function but if I can start and drive without it why bother? If I happen to take the car up north and it's cold overnight, I can easily clip the linkage back to the arms.
Dave W. from Gilbert, AZ
65 Corsa 140/4
66 Corsa 140/4
66 Corsa 140/4 w/factory A/C
66 Corsa 455 Toro V8
65 Monza Convertible 110/4
66 Monza Convertible 140/4
65 Monza 4DR 140/PG w/factory A/C
65 Monza 4DR EJ20T/5
Top
Post Reply
11 posts • Page 1 of 1