On my 66 Coupe - 4 speed, sometimes when I turn the key - nothing happens - battery is good. To get the engine to turn over, I put it in a low gear and move the car so the engine actually turns over, and then it starts.

This is a very intermittent situation, but frustrating. I think there is a "dead" spot, if you will on the starter, and by rolling the car, it move the starter to "good" position, making electrical contact, and thus allowing the engine to turn over and start.

I think I need a new starter. I wanted a second option on this. I don't believe this would be caused by a intermittent issue with the solenoid.

Thanks for the feedback.
Top

My starter occasionally jams on the starter ring gear, entailing loosening or removal of the starter each time, in order to free things up.

I got a new Bendix this summer but that didn't help. Everything seems to work okay. But I discovered 2-3 chipped teeth (in a row) on the ring gear. This could be where the problem lies.

Has anyone had success in building up chipped teeth by welding, and then grinding the weld down to simulate the adjacent tooth profiles? Can one even weld this sort of thing (I assume it's hardened steel)? The car is a 1937 Hudson Terraplane and I assume that the ring gear construction is similar to that of other cars of its era.

Replacement of the ring gear will possibly entail removal of the engine due to tight clearances between overdrive and frame. A rather extensive undertaking, so I'd like to exhaust all other possible ideas first. I'd be grateful for any thoughts on this. When the starter solenoid is energized, it physically moves the drive pinion gear to engage the large ring gear that is welded to the clutch pressure plate or Powerglide torque converter. Without that physical engagement that takes place only when the starter solenoid causes it, the ring gear and pinion gear are not touching and are disengaged. Once the two gears are engaged, the plunger contact disc at the back end of the solenoid simultaneously makes contact between the battery terminal and the starter motor terminal, which applies battery voltage to the motor and causes it (and the pinion gear) to spin and rotate the engine through the large clutch ring gear.

The cause of your trouble may NOT be the starter or starter solenoid at all!

When you attempt to crank the engine my turning the key to START, does the starter make any noise at all? If you hear a click you may be hearing the pinion gear move forward to engage with the ring gear. If this movement is sticking — possibly hitting a damaged ring gear tooth or a burr on a tooth of the ring gear, it may be stopping the solenoid movement and preventing a full engagement of the two gears. if this occurs, the movement of the solenoid plunger may not be sufficient to permit the contact disc at the other end of the plunger to make contact between the battery terminal and the motor terminal — so the motor is never energized because a damaged ring gear tooth may be preventing the solenoid from successfully engaging the two gears and then energizing the starter motor.

Rolling the car with the transmission in gear would physically turn the crankshaft and clutch pressure plate/ring gear, but would have no impact on the starter motor because the idle starter motor pinion gear is not touching the the clutch ring gear (unless the two gears were somehow stuck together from the previous attempt to engage the starter). When the key is released, voltage is no longer applied to the starter solenoid, and the large solenoid return spring pushes the solenoid plunger back to the neutral position where it is disengaged from the clutch ring gear. However, moving the car in gear would move the engine a bit, and advance the ring gear a few teeth, so that the next attempt to use the starter would be successful because the faulty ring gear tooth is no longer aligned with the starter pinion gear.

The intermittent failure you described would happen randomly, and only when the damaged ring gear tooth happens to align with the starter when you shut off the engine. The next attempt to start the car would then fail, because the faulty ring gear tooth was in the way again. Bumping the engine crankshaft position by pushing the car in gear would move to another ring gear tooth that was undamaged — permitting the starter motor to once again function properly. (Rotating the engne crankshaft slightly using a socket wrench or a large box end wrench would accomplish the same thing as bumping the engine position by moving the car when in gear).

If you remove the starter and look into the hole with a flashlight or work light you will be able to see some of the teeth on the ring gear. Rotating the engine a small amount using a wrench on the crankshaft pulley bolt will expose another set of ring gear teeth. You may possibly be able to spot the damaged ring gear tooth using this process. The faulty tooth may or may not be able to be repaired using a file or grinder of some type. If you cannot repair it with this method, removing the powertrain, separating the engine from the transaxle, and replacing the clutch pressure plate may be the only way to fix this problem. 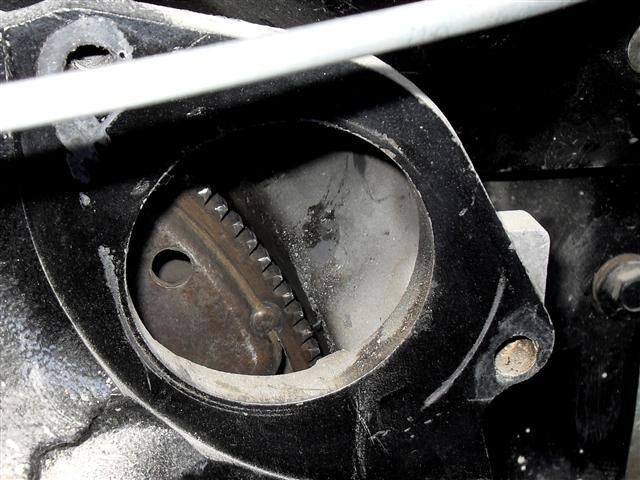 
If my theory turns out to be incorrect, and your ring gear is intact and in good condition, click on this link for some other ideas...

As Brad said movinv the car does nothing to the starter.
I'll list the things I would guess in order starting with the most common.
1 dirty battery posts/clamps
2 bad solenoid - new ones often go bad quickly
3 bad wiring
4 bad brushes or armature
5 bad ignition switch
113 Corvairs, 5 Ultravans and counting
Northlake, TX
Top

I would also suspect each of these items on the list... except why does putting the car in gear and moving the engine to a new position seem to clear the problem? Doing this only repositions the engine crankshaft and clutch/ring gear a bit, and yet this seems to get the starter system working again! What has changed? It would appear that only the teeth on the ring gear have moved, and yet the starter works now! That clue, and the fact that this problem crops up randomly and unpredictably might be tied to which ring gear teeth end up opposite the starter drive pinion gear when the engine is stopped. This could be significant, if it turns out that only one tooth on the ring gear is causing all the grief.

It is only one unproven theory. The theory of bad brushes or armature, or a bad solenoid, will require new parts to prove or disprove. A bad ignition switch can be easily bypassed with a remote starter switch (or using some other method of applying voltage directly to the "S" terminal when the starter won't work). You could easily clean the battery terminals and posts, or replace the battery cables with new ones if you suspect they are bad. Verify that the heavy gauge thick battery ground cable is bolted directly to the engine. The thinner ground wire should be attached to the car chassis. The thick positive battery cable attaches directly to the starter solenoid for a reason — the starter motor pulls more current than everything else in the car! There must be a ground return path from the engine to the battery negative terminal that is equal to the thickness of the positive terminal, to let all that current that the starter motor draws make its way back to the battery via an equally capable ground return path.

"It would appear that only the teeth on the ring gear have moved, and yet the starter works now!"
True but he said nothing happens not that the starter spins and doesn't turn the engine.
I'm thinking maybe just the movement of the car reconnects a bad connection.
I should have asked if the idiot lights go out when he turns the key. If they stay on it pretty much narrows it down to wiring or solenoid.
113 Corvairs, 5 Ultravans and counting
Northlake, TX
Top

On my 66 Coupe - 4 speed, sometimes when I turn the key - nothing happens - battery is good. To get the engine to turn over, I put it in a low gear and move the car so the engine actually turns over, and then it starts.

This is a very intermittent situation, but frustrating. I think there is a "dead" spot, if you will on the starter, and by rolling the car, it move the starter to "good" position, making electrical contact, and thus allowing the engine to turn over and start.

I think I need a new starter. I wanted a second option on this. I don't believe this would be caused by a intermittent issue with the solenoid.

The symptoms are, as yet, not totally clear. There may be a "dead" spot — but not in the starter motor. The "dead" spot may be on the clutch pressure plate ring gear.

When you state that when you turn the key, "nothing happens". Is there any sign of a click sound from the starter solenoid, as if it were shifting the plunger position but not actually turning the starter motor on? The existence of a clicking sound could help to verify my theory of damage to one tooth area of the clutch pressure plate ring gear that might be preventing the pinion starter gear in the starter housing from fully shifting position from its idle "parked" position to its fully engaged position with the ring gear. If it is hitting a damaged portion of the ring gear, that could be preventing ithe pinion gear's full travel, which would also prevent the solenoid starter motor switch (contact disc) from establishing contact with the Battery + terminal and the Starter Motor terminal to turn the starter motor drive ON. Without a successful switching connection, the only sound that would be heard would be a click as the solenoid plunger moved part way into the ring gear, and then was pushed back by the solenoid return spring when the key was released.

That is possible, so the next time the starter fails to function, don't move the car! Instead, get a socket wrench or box end wrench that fits the bolt in the center of the harmonic balancer. Try to note the exact position of the timing mark on the harmonic balancer. If the timing mark cannot be seen, use a marker to place a mark on the edge of the harmonic balancer next to the zero on the timing scale. Then use the wrench to manually turn the engine about ten degrees or so counterclockwise. This will physically shift the ring gear's position in relation to the starter pinion gear. No jarring of the vehicle will take place to possibly reconnect a bad connection. Finally, turn the key to try to start the engine with the starter pinion drive gear now coming into contact with a different part of the clutch ring gear. If the starting attempt is now successful, the theory of the existence of a damaged portion of the ring gear may be proven.