Also check to be sure that the baffles that go between the pushrod tubes and the bottom of the cylinders/heads were not left off when doing some previous work. This happens often and keeps heads from cooling properly.
Top The general consensus is the cylinder baffles are far more important than the bottom shroud with the thermostat for the rear doors.

The cylinder baffles do two things -

1) They restrict or divert airflow from the cylinders to the heads. The heads get hotter and need the greater portion of airflow.

2) They force air around the lower (or back side from air flow) cylinder side so the cylinders are cooled evenly to ensure more even expansion and uniform long term ring/cylinder wear.

Based on claims, removing the lower shroud increases engine cooling in hot weather, BUT it also degrades the efficiency of the heater and of course you loose the fast warm up function from the thermostats. Constantly running an engine too cool is just as bad as running one too hot. Unless you are driving in the S.W. in the summer, or going racing, there is no need to remove the lower shrouds. GM tested Corvairs in 120 degree weather with full engine shrouds and all was good. Of course this was normal driving, not racing WOT around a track.

From our airborne friends and their aircraft mechanics who make regular use of air cooled reciprocating engines in the skies. I believe that GM engineers adopted some of these principles from them when designing the Corvair engine...

Reciprocating engines use some type of intercylinder and cylinder head baffles to force the cooling air into close contact with all parts of the cylinders. Figure 6-50 shows a baffle and deflector system around a cylinder. The air baffle blocks the flow of air and forces it to circulate between the cylinder and the deflectors. Figure 6-57 illustrates a baffle and deflector arrangement designed to cool the cylinder head. The air baffle prevents the air from passing away from the cylinder head and forces it to go between the head and deflector. Although the resistance offered by baffles to the passage of the cooling air demands that an appreciable pressure differential be maintained across the engine to obtain the necessary airflow, the volume of cooling air required is greatly reduced by employing properly designed and located cylinder deflectors.

Figure 6-57. Cylinder head baffle and deflector system.
As shown in Figure 6-55, the airflow approaches the nacelle and piles up at the top of the engine, creating a high pressure in the top of the cylinders. This piling up of the air reduces the air velocity. The outlet at the bottom rear of the cowling produces a low-pressure area. As the air nears the cowl exit, it is speeded up again and merges smoothly with the airstream. The pressure differential between the top and the bottom of the engine forces the air past the cylinders through the passages formed by the deflectors. The baffles and deflectors normally are inspected during the regular engine inspection, but they should be checked whenever the cowling is removed for any purpose. Checks should be made for cracks, dents, or loose hold down studs. Cracks or dents, if severe enough, would necessitate repair or removal and replacement of these units. However, a crack that has just started can be stopdrilled, and dents can be straightened, permitting further service from these baffles and deflectors.

A update for the heating problems engine.

The thermostat doors on both sides are open, the (electric) fuel pump has been replaced near the gas tank, all seals are new so the cool air can't escape thru holes. the heating of the engine is not the problem , it's getting hot (especially with the temperatures here in holland at the moment 28 celsius) but not to much. The only problem is vapor lock. after a few km, the car begins to stutter and finally turns off. And when I wait for about 15 minutes I can start the car and drive on (for a few km). I have to notice that the insulation plate under the hood is missing. I don't know if it makes any difference but the plate is not fitted by Chevrolet for the ornamental I presume.

I'm still not certain if the issue below has been resolved on your engine. A paper-thick gasket alone is not enough. If the thick plastic insulators are not installed between the carburetors and the cylinder heads, the fuel inside each carburetor WILL BOIL, and you will have a problem with vapor lock. Old insulators are easily damanged and can crack, causing a vacuum leak and a lean fuel/air mixture, which can cause an engine to run hot.


bbodie52 wrote:I wanted to make sure that some important insulators were not accidentally omitted when your car was worked on in the past…

If the insulators are not present, and only a single gasket is being used under each carburetor, the fuel may be close to boiling when the car is driven. The use of fuel may allow some effective cooling of the fluid in each float bowl as fuel is consumed and replaced with cooler liquid from the tank. But when the engine is shut down the remaining heat from the heads may continue to heat the gasoline in the float bowls of the idle engine, causing the gasoline to percolate and appear as it drips from the venturi cluster in each carburetor.

The plastic insulators between the carburetors and cylinders are installed, but they might be damaged and cost a vacuum leak (I don't know, how old they are) It's probably the best to replace them for a new set just to be sure. And of course a isolation plate to the engine hood
Top

When I overhauled the carburetors on my Corsa (140 hp 4x1) I tried to gently lift the gaskets and insulators off of the intake manifolds. They simply crumbled and broke apart, so I purchased all new gaskets (2 per carburetor) and new insulators (1 per carburetor). It is conceivable that your insulators might have been damaged as you removed and replaced carbretors.

Don't forget those hoses that connect the balance tube to the intake manifolds. Replacing them and adding hose clamps might be a good idea. A vacuum leak here can be a real problem. It's been a while that I've been on the forum, busy with other things.

Still the problem with vapor lock hasn't been solved. But I've been thinking that it might be a electric problem ?
I've noticed today that the coil becomes very hot, so I was thinking that there is some malfunction in the electric circuit ?
(i'm just thinking out loud i'm not a mechanic) I got my Corvair 5 years now and I don't know if it's the right type or functioned well.
Top

You need to check to see what is actually wrong when it quits. Check for fuel in the carburetors and spark at the coil and plugs. Let us know so we can narrow it down.
114 Corvairs, 5 Ultravans and counting
Northlake, TX
Top

I've solved the vapour lock problem by wrapping the fuel lines with a rubber air hose .

It does'nt look nice,.........but it seems to work. I've droven my corvair for about a our in the sun (temperature 25 celsius) and the engine keeps running

You really need to change that setup. Pressurized rubber fuel lines and plastic filter in the engine compartment and especially that close to the alternator fan and belt is asking for a fire. Maybe the parts closest to the alternator are just wrapped in rubber but it is hard to tell in the picture. You shouldn't have any vapor lock problems in pressurized lines.
114 Corvairs, 5 Ultravans and counting
Northlake, TX
Top

A broken or flipped fan belt could impact the fragile fuel lines above the belt and send gasoline spraying all over the hot engine. If the fuel ignites your car could be destroyed.

When GM implemented the use of the SMOG Pump (Air Injection Reactor) in the late 1960's, engine compartment temperatures went up significantly, increasing problems with vapor lock as the fuel in the steel fuel lines heated up. This became a greater problem when the fuel in those lines became stationary, as it does when the carburetor float bowls became full and the needle/seat valve in each carburetor stopped the flow of fuel. The stationary fuel in the lines would heat to the point of vaporizing and causing vapor lock.

GM engineers reduced the problem by creating a small fuel return line from the fuel pump outlet back to the gas tank. Even with the carburetors no longer accepting fuel, the fuel in the lines would continue to flow via the return line back to the gas tank. This continuous movement of cool gasoline had the effect of cooling the fuel in the gas lines and preventing vapor lock conditions. As you can see in the photos below the rigid steel lines are routed under the fan belt, so they are less vulnerable to damage. If you were to duplicate this configuration in your Corvair, you would likely solve your vapor lock problem while configuring your fuel system in a safe way. 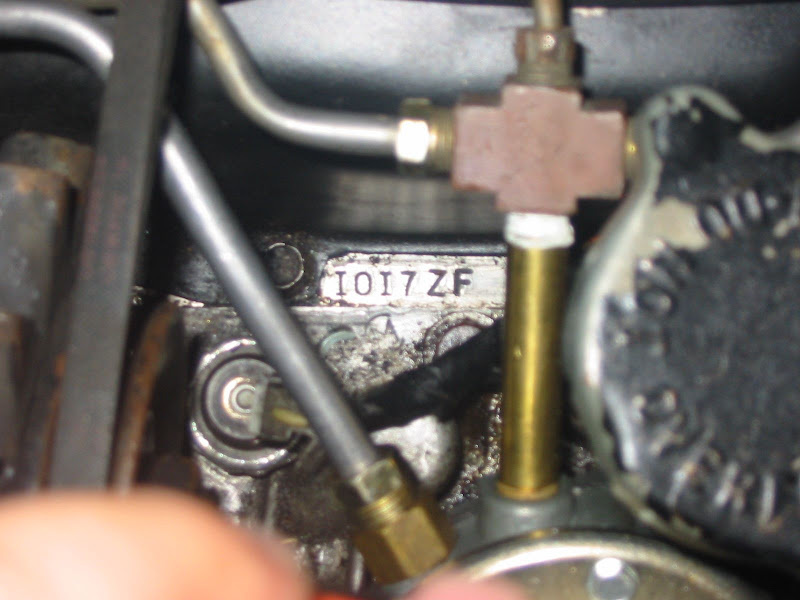 I'm not using the original fuel pump. I mounted a electric feul pump, and as far as I know it does'nt have a retourline
Top

I did read that but it sure looks like a plastic filter with rubber lines on the left side of the engine compartment.
114 Corvairs, 5 Ultravans and counting
Northlake, TX
Top