There is a movie out there called "Raise your voice" (circa 2004) that has an early convertible in several scenes.

I saw one tonight on TV. Episode # 5 of Pan Am originally aired on 10/23/11 showed a beautiful red Spyder for just a few seconds. It looked like a very nice EM with great paint. I do not have the tools to record and post. Sorry,

Phineas and Ferb has had Corvair FC's a couple of times. First I saw a hippy van that was most definitely a Greenbrier (it's a cartoon so not dead on.. but no question that it was a Vair). Also in one episode the robot (Norm?) turned into a truck. The body was extended and had two rear axles but it looked far more like a rampy than any other vehicle I've ever seen.
Ray "Trip" Rodriguez III
Gouldsboro, PA
66 Corsa 140 coupe
65 Corsa 180 Turbocharged coupe
64 Monza Convertible
61 Air conditioned Monza coupe (Missy's)
See them here: https://tinyurl.com/ydc7txrf
Top

flashpoint
Corvair of the Month

In the old movie Gumball Rally in the scene just before a very young Gary Buseys character is introduced there is what looks like it might be a lakewood getting trashed for a stunt. Its a fast scene so maybe someone can confirm?
Top

If you are really to see a Corvair in the movies or on TV, there is a 1963 Corvair used in a murder scene in the 2007 movie Zodiac. The movie, called Zodiac, stars Jake Gyllenhaal and Robert Downey Jr. (The movie is about the Zodiac killer who terrorized San Francisco in the 1960's.)

At the park, Darlene and Mike see a group of partygoers who throw firecrackers at Darlene’s Corvair and then drive off with laughter. Mike shouts at the tricksters, and the two continue to talk as they listen to Donovan’s classic song, Hurdy Gurdy Man. Soon, another car approaches and stops behind them. Mike notes, “I saw that car at Mr. Ed’s.” The car drives away and Mike asks Darlene if the driver was her husband, but Darlene says, “No.” Mike again asks, “Who was that, Darlene?” and Darlene responds, “Don’t worry about it.” Mike, concerned, tells her, “Don’t tell me not to worry about it. Who was it?” Darlene replies, unconvincingly, “It’s nothing.”

Seconds later, they hear the screeching sounds of a vehicle turning around at high speed. The car, a reddish brown colored Mustang, speeds back into the parking lot and comes to a stop behind the Corvair. Fearful, Mike tells Darlene, “Let’s go.” A man emerges from the Mustang, holding a light. Mike tells Darlene to get her identification out, as if he believes the man is a police officer. The light shines along the passenger side of Corvair as Mike looks up at the man and says, “Man, you really creeped us out.” Before he finishes speaking, bullets rain down upon him and Darlene. The man fires a gun into the Corvair. The sounds of the shots are loud and reverberate although the gun has a silencer attached to the barrel. The man then walks back to his vehicle only to return to open fire on Darlene and Mike again. The gunman then walks back to the Mustang and climbs inside.

Moments later, a motorcycle officer arrives on the scene and discovers Mike, bleeding profusely from a wound to his mouth, lying by the rear wheel of the Corvair. The officer inspects the interior of the Corvair and the lifeless body of Darlene. The audience hears the audio of a phone call to police as the killer confesses his crime and directs authorities to the scene.

You can also see Corvairs used from time to time in old reruns of the TV series ADAM-12. The were quite common on the streets of Los Angeles back in the 1970s, and appear several times in various episodes.

Popcorn, a couch, and streaming video reruns [via NETFLIX] of ADAM-12

what better way to spend your evenings, hoping for a glimpse of a Corvair on TV!

reidmier
Corvair of the Month

In the 1964 movie "Sex and the Single Girl", there is a '61 Monza that repeatedly swerves out of the way of the main character's cars as they enter the highway. I think its 3 times in a row that the same car is used. 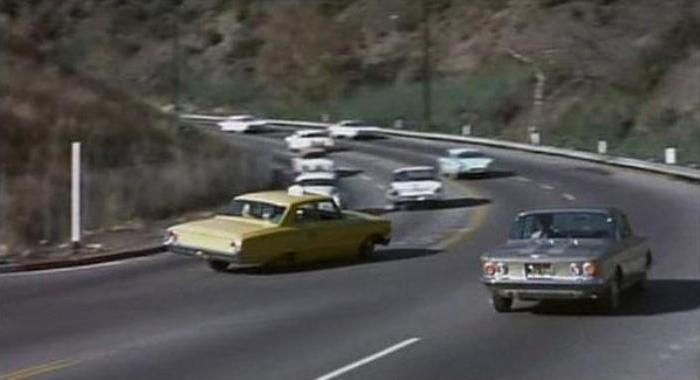 You might try the series Vegas. I've seen many old and interesting cars on that show, including a red Corvair Spyder convertible that belongs to the Vegas D.A. that makes an appearance from time to time. You can see some still images of a Corvair appearance sequence at the following Corvair Forum link...

The look of that Corvair Monza convertible in Vegas sure inspired me to want to find an Early Model Monza to add to my "Corvair stable". Yes, given the time and money I could conceivably own a similar EM Monza. And no, I have no illusions about such a Corvair helping me to get the girl!

Cyrus
The movie was ok i guess but about one third thru the movie i spotted a blue late model Vair. It was at night in the movie and it was brief. But after rewinding about five times I am sure of it. Anyone else catch this?
1964 Monza Corvair
Top

CorvairKid
Corvair of the Month

Just say a Greenbier in the movie Godzilla (1998) Its at the beginning of the movie where Matthew Broderick is first shown in movie driving 61 Greenbrier in Russia digging up earth worms.

Has just about every car you can think of in movies I've never heard of.
Restoring a 1966 Corvair Monza in Los Angeles one piece at a time.
Top

My favorite Corvair movie sighting was in Animal House. I saw the movie back when it came out at the local theater in the 70s. After watching it on TV for the hundredth tine I spotted a Corvair convertible for a split second parked outside the Delta frat house. Ironic thing is that the car looks exactly my 1963 white convertible w/white top. Favorite movie = Favorite Car!

UNSAFE wrote:Here's a bunch of them . I have many of them saved but I didn't label most of them.

The one with the guy trying to hitch a ride with the Rampside looks like Phil Silvers from
"It's a Mad, Mad, Mad, Mad World" after he sank his 1948 Ford Convertible in the river.
1964 Monza Spyder Turbo Convertible.
1949 Ford 8N Tractor
2006 Toyota Tacoma TRD Off-Road 4X4 Pickup
Top

In the 1970 movie Airport there is an outdoor scene midway (55 minutes) through the movie in the snow, at the passenger drop-off area outside the airport terminal, with a snow-covered late-model Corvair parked at the curb (a minor cameo appearance). The brief appearance by a Corvair follows a scene where actor George Kennedy fails in his first attempt to move a stuck Boeing 707, and just before a scene where actress Helen Hayes — playing a captured stowaway — manages to escape from airport security to stowaway once again!

Most of the filming was at Minneapolis–Saint Paul International Airport. A display in the terminal, with stills from the field and the film, says: "Minnesota's legendary winters attracted Hollywood here in 1969, when portions of the film Airport were shot in the terminal and on the field. The weather remained stubbornly clear, however, forcing the director to use plastic 'snow' to create the appropriate effect."

Only one Boeing 707 was used: N324F, a 707-349C leased from Flying Tiger Line. It sported an El Al cheatline over its bare metal finish, with the fictional Trans Global Airlines (TGA) titles and tail. This aircraft later crashed during a landing while in service with Transbrasil, killing three crew members and 22 persons on the ground...

...The film was a critical success and surpassed Spartacus as Universal Pictures' biggest moneymaker. The movie won Helen Hayes an Academy Award for Best Supporting Actress for her role as an elderly stowaway and was nominated for nine more Academy Awards, including Best Picture, Best Cinematography, and Best Costume Design for renowned Hollywood designer Edith Head...

...Burt Lancaster himself dismissed the film as "the biggest piece of junk ever made".

The movie spawned three sequels, plus the comedy parody Airplane! The Corvair — possibly based in the Minneapolis-St. Paul area in 1969 — was not invited back for any of the sequels.
Brad Bodie
Lake Chatuge, North Carolina