Below is a copy of an excellent CorvairCorsa.com article https://corvaircorsa.com/monzap10.html
that goes well with the above video.
I copied it here for more to see,
and to encourage you to visit this excellent website...

While photographing the cars on display at Eyes On Design, I hoped to encounter someone who had worked in the design studios during the Corvair period. That didn't happen. However, months later, I was delighted to receive an email message from Jim Musser, designer and builder of the chassis for the Monza GT and SS. I requested and received his approval to post the following personal account of events surrounding the development of the GT and SS.


In the words of Jim Musser, designer and builder of the GT and SS chassis...

In the early '60s we had a number of very interesting projects in Chevy R&D. Ford had announced its Cardinal project, a small front drive vehicle. Chevrolet R&D responded with a project to build a prototype front drive vehicle using the Corvair engine and drivetrain. I was assigned to the project. For packaging reasons we placed the Corvair engine ahead of the front axle by simply reversing the ring and pinion gears.

When Bill Mitchell became aware of our project he felt that the forward engine arrangement could be the basis for a low cost mid-engine sports car that was then the direction sports cars were taking. There of course was a lot of interest at the time for the next Corvette to be a mid-engine design, but the cost of a unique drivetrain was prohibitive. Since we already had the low cost Corvair drivetrain he envisioned a low cost sports car, not as a replacement for the Corvette, but as a broader addition to the Chevrolet product line.

Bill had a secret studio in the basement of the Styling Building to work on pet projects outside the overview of Corporate Management. Larry Shinoda was the designer. Bill invited Frank Winchell (the head of Chevy R&D) and me to come over and see the clay model that Larry had made and asked if we would build him a chassis. Frank agreed to do it and I was given the project.

Bill liked to have a GM display of show vehicles at Elkhart Lake each year and said he would love to take this vehicle but since Elkhart was only two months away it would not be possible. I said we could design and build a chassis in time. Bill became excited about the project and worked very closely with Larry to jazz up the clay model which initially was not very exciting, looking like a Porsche coupe. 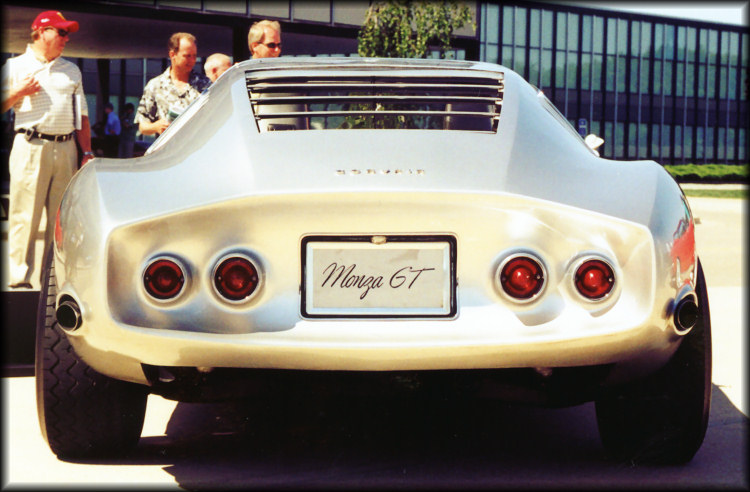 Bill envisioned a tubular space frame chassis like that being used in racing sports cars of the time, but I convinced him that a monocoque chassis was the new, better approach. We designed and built a running chassis in one month and delivered it to Styling for installation of the body. At the rear I used the suspension from the Corvair front drive project which used torsion bars rather than coil springs to make room for the half-shafts. The same suspension was also used at the front. We made it to Elkhart Lake.

An interesting aside is that Jim Hall and Hap Sharp, who were in the process of designing their mid-engine Chaparrals, came over to inspect the vehicle at Elkhart because of its similarity to what they were doing. It was this chance meeting by Jim and Hap with Frank and me that lead to Chevy R&D's association with Chaparral Cars.

Because the Monza GT was going to be tied up as a display vehicle we built a second chassis for development purposes. Accessibility to the mid-engine was a problem with the monocoque chassis. For that reason we decided to use the standard Corvair transaxle with the engine hanging out the rear where it was very accessible.

We did a lot of development on this vehicle at a local road race course. In fact during a visit to Detroit by Roger Penske we took him to the track to evaluate the vehicle. As a result of that visit we decided to build a third chassis with a number of refinements including replacing the torsion bars with Koni spring/shock units for easier setup adjustments. After we built the third chassis we gave the second one to Styling and it was used to build the Monza SS.

The third chassis was taken to Riverside for two weeks of development testing will Bill Krause driving. At the time Krause was racing a Birdcage Maserati. Krause lapped several seconds faster in our car and in fact came within a second of Penske's record in his Cooper Special. 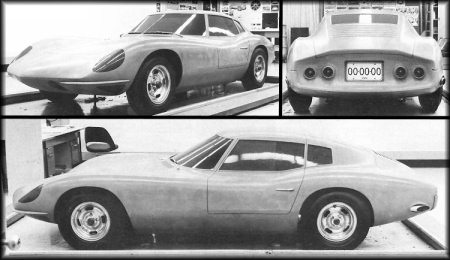 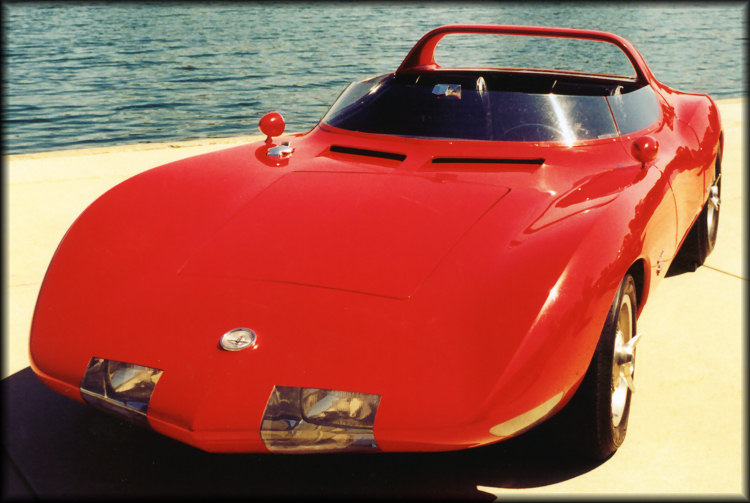 A concurrent project in R&D was a redesign of the Corvair engine to reduce cost and improve engine size flexibility. The design used a separate one piece head and barrel casting for each cylinder. This allowed us to build engines of varying size. In fact we built a two cylinder version used in a very small, inexpensive prototype vehicle. A four cylinder version was used in my front drive project. A six cylinder, 3-liter version was used in the Riverside vehicle. This engine used Weber triple carbs. Perhaps the most interesting was a ten cylinder version that was used in a full size, front drive, Chevrolet sedan prototype. The engine project was dropped when the decision was made to discontinue the Corvair.

After receiving Jim's email and reading his story, I thought I'd spend some time on the web researching his career history. I found an interview with Larry Shinoda https://www.corvetteactioncenter.com/sp ... /gs2b.html in which Jim is remembered at the proving grounds driving a Grand Sport II to 198 mph (318.7 kilometers per hour) at which point the air flow got under the thin fiberglass doors and they popped off. You know you're fast when you blow your own doors off!

Speaking of blowing doors off, linger for a few moments on a car with no doors; the Astro-I. We captured the car directly in front of the design building, where it drew its fair share of attention. The third Corvair design study to be built around a Jim Musser chassis, it is the most futuristic of all the Corvair concepts.

The Astro I is covered more extensively elsewhere on this website, and this page offers exclusive photos of the unique Corvair-powered vehicle.

The picture at the right focuses on two unique aspects of the Astro I; its steering yoke, and the roof mounted, triple element rear view mirror which provides the driver with a wide angle rear view.

Compare the height of the Astro I with the guy standing directly behind it. The canopy is not completely closed, and it barely reaches the man's waist. The car's overall height is 35.5 inches (90.17centimeters). 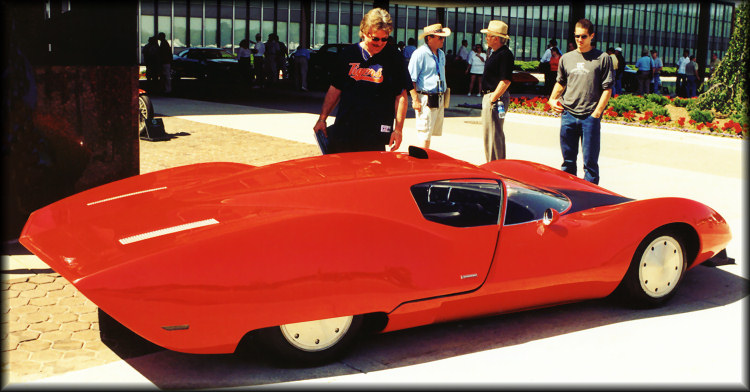 Viewers of the car agree that the periscope-like rear view and side mirrors are essential to the Astro I. Without them, it would be difficult if not impossible to see rearward. A back-lite or rear window would be of little help due to the shallow angle of the canopy top. In this car, you can be followed but not easily identified. 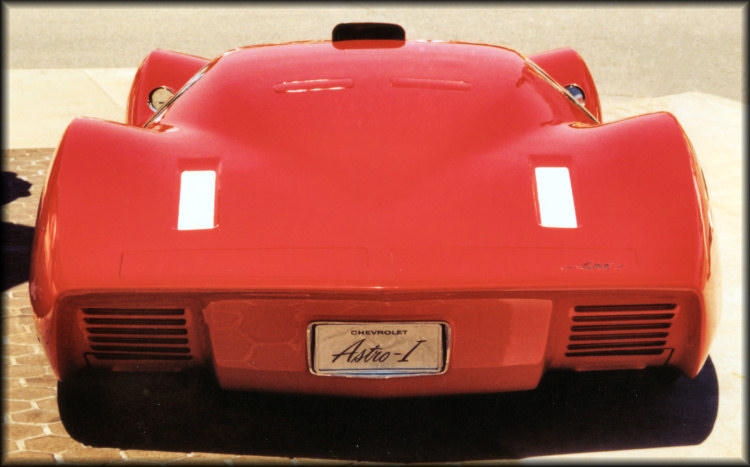 ts design dates back to the '60s, but the Astro I would look right at home in a 21st Century movie. Are you a Hollywood producer in need of a perfect stunt machine to drive under a moving semi-trailer? Put your people on it. They'll have to convince its caretakers it will come to no harm!


Some people divide Corvair lovers into two groups—early or late model fans—and my friends know I favor the late model. Admittedly, my love of Corvairs reached its peak with the release of the late model, but was smitten much earlier by an early model derived from the Super Spyder seen below. 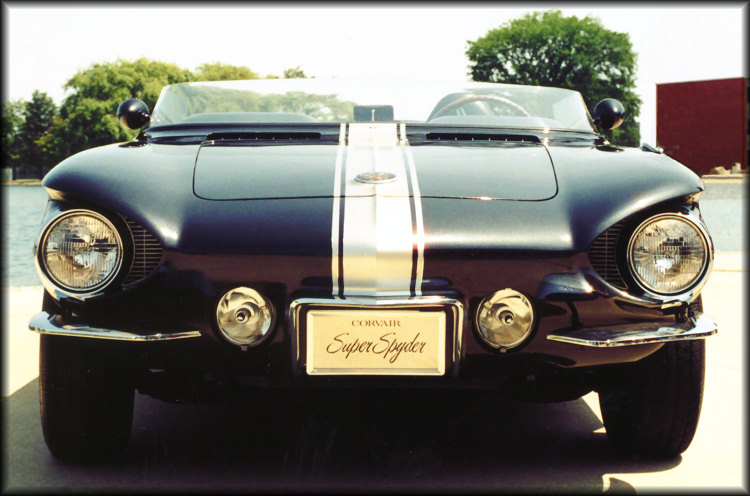 The Super Spyder's nerf bar style bumpers and license plate surround as seen in the picture above were imitated in the aftermarket. Its Lucas Flamethrower driving lights were easily adapted to the high beam positions of the 4-lamp setup of the stock Corvair.

The multi-gauge instrument cluster seen at right became a production item in the 1962 model year when the Corvair Monza Spyder made its debut as both convertible and coupe. 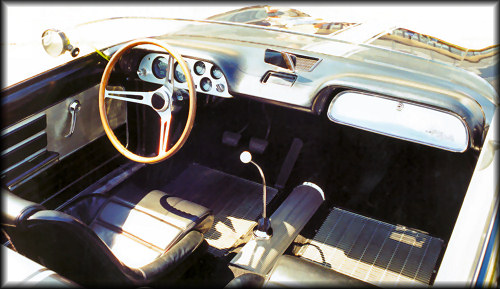 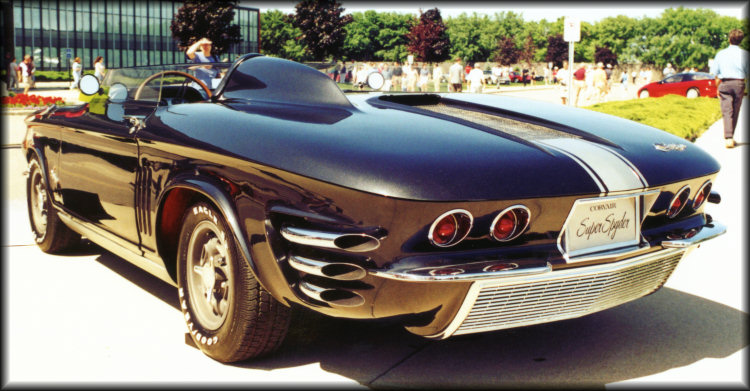 Now well over 40 years after its creation, the Super Spyder exudes its magic, entrancing the uninitiated. It is the stuff of dreams, evoking emotion, challenging mediocrity, and sustaining the mythology of the Corvair.